Out and About During the Summer of 2013

It’s time to catch up with some recent events and programs FLDRN participated in, to promote the importance of organ, eye and tissue donation: Donate Life Night with the Syracuse Chiefs; They Had a Ball at Kicks4Kidneys Soccer Tournament, and Fundraising and Fun at Red Wings Concession Stand.

The articles in this section: 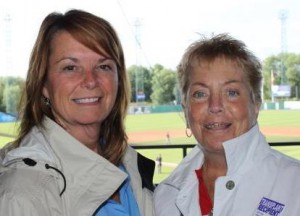 At the Syracuse Chiefs Donate Life Night: Left to right, Joan Burke from the Musculoskeletal Transplant Foundation (MTF) and Sue Sprague, a kidney and pancreas recipient.

On June 28, 2013, six donation and transplantation agencies in the Syracuse area, including Finger Lakes Donor Recovery Network, collaborated with the Syracuse Chiefs to present “Donate Life Night with the Chiefs.”

It was a wonderful night highlighting the success of transplantation and encouraging those in attendance to enroll in the New York State Donate Life Registry.

The National Anthem and first pitch were each performed by local residents who have been impacted by donation.

Announcements about donation and transplantation were made throughout the game, and, just before the fireworks began, fans waved the blue and green glow sticks they received when entering the park, lighting the stadium in the colors of donation. 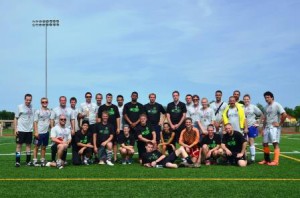 You have to love their names! The Kicks4Kidneys tournament teams pictured here are “Cool Runnings” in black, and “Dickey’s Tavern” in gray (the winning team). The other teams that participated were “Sharknado!” and “The Human Feet Horses.”

Kicks4Kidneys is an annual co-ed soccer tournament that raises funds so that Team Finger Lakes can attend the Donate Life Transplant Games of America.

The July 2014 Games will be held in Houston, Texas.

In the 6th annual Kicks4 Kidneys tournament, four teams spent July 21 in support of this event at Honeoye Falls-Lima High School.  They played hard and had fun along the way!

The tournament’s winning team was Dickey’s Tavern, led by their captain, Jeff Brickand.

Special thanks to Tim Parks and Jamie Friello for their dedication to making this event a success.

Eleven Finger Lakes Donor Recovery Network staff and volunteers volunteered at the Rochester Red Wings home plate concession stand on August 3, 2013. The group ran the registers and filled food orders with lots of laughter and fun along the way!

The Red Wings allow not-for-profit organizations to staff home plate in an effort to raise money.

Our group, including two recipients on Team Finger Lakes, raised money to send the team to the 2014 Donate Life Transplant Games of America.