In his State of the State message delivered in Albany this afternoon, New York Governor Andrew M. Cuomo included promotion of organ donation and improvement of the donor registry process as one of the top healthcare priorities for the coming year.

The overall theme of the governor’s 2014 State of the State is “Building on Success.” Under the specific topic “Building Community: Health,” Mr. Cuomo referenced the creation of a public-private partnership with the organ donation community to increase enrollment in the New York State Donate Life Registry.

“New York has one of the lowest organ/tissue consent rates in the nation,” Mr. Cuomo said. In addition, he pointed out the New York donor registry “lags the country with an enrollment rate of 22 percent, compared to 45 percent reported by other states.”

“We are delighted and grateful that Mr. Cuomo confirmed New York State’s Department of Health will launch a public-private partnership with the organ donation community to better manage the Donate Life Registry,” Mr. Kochik said. “It is tremendously encouraging news for our efforts to have the registry acquisition language included in the Executive Budget.”

He added: “This is by no means the last word, but it is certainly reassuring that we will be successful in creating a more effective tool for enrollment in New York. We feel sure this will lead to more New Yorkers becoming organ donors and many more lives being saved.” 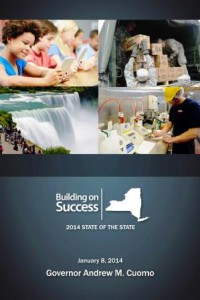 “Organ transplantation is a standard treatment for end-stage heart, liver, and kidney disease. Unfortunately, the demand for donated organs far exceeds the supply. Currently, there are more than 10,000 individuals on organ transplant waiting lists in New York State. In 2012, a total of 612 individuals died while waiting for a donated organ; on average, someone in New York dies every 15 hours because of the organ shortage. New York has one of the lowest organ/tissue consent rates in the nation. Enrollment in the registry is well below the national goal of 50 percent of the state eligible population. New York lags the country with an enrollment rate of 22 percent, compared to 45 percent reported by other states. To increase public awareness of the critical need for organ/tissue donation, the Department of Health will launch a public-private partnership with the organ donation community with the goal of increasing enrollment in the New York State Donate Life Organ and Tissue Donor Registry and improving consent rates for organ/tissue donation.”