Celebrating its 10th annual appearance in the parade, the Donate Life Float once again served as a memorial to organ, eye and tissue donors.

The Donate Life Float, with the theme “Light Up the World,” won the Excellence in Presenting Parade Theme Award at the 2014 Rose Parade in Pasadena, CA on New Year’s Day. 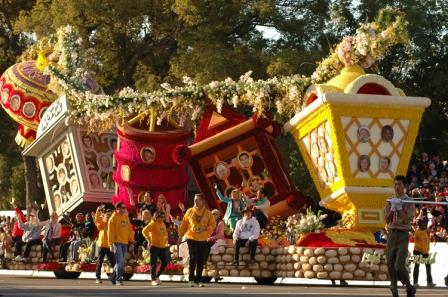 The award-winning Donate Life Float, “Light Up the World,” at the 2014 Rose Parade.

In front of a  television audience in the millions, the float provided a platform for deceased donors, donor families, living donors and transplant recipients to inspire the world.

Inspired by the theme of the 125th Rose Parade, “Dreams Come True,” the award-winning Donate Life Float showcased what was described as “a festival of beautiful lanterns” designed to inspire viewers to save and improve lives through organ, eye and tissue donation.

The float featured prominently under clear, sunny skies during the first half hour of the two-hour telecast. It was built by Phoenix Decorating Company from a design by Dave Pittman.

Check out the ROSE PARADE PHOTO ALBUM, below.

Finger Lakes Donor Recovery Network (FLDRN) was proud once again to be associated with the Donate Life Float. During the parade, FLDRN celebrated the life of deceased organ donor Christine Springer. Christine, who was 71 when she became a donor, lived in Trumansburg, NY. Of all the deceased donors who were honored at the parade, Christine was the oldest.

Also, together with the University of Rochester Medical Center, FLDRN honored liver transplant recipient  Richard Perez. The 59-year-old resident of Rochester, NY received his life-saving transplant over ten years ago.

Five strikingly attractive lanterns on the Donate Life Float were adorned with 72 memorial floragraph portraits to honor those who gave the gift of life and whose legacies of life shine brightly, including that of Christine Springer’s. A floragraph is a portrait created with floral materials.

The float illuminated 30 riders – all grateful organ, eye and tissue transplant recipients – and 12 living organ donors, walking alongside to demonstrate their ongoing vitality. Richard Perez and the other riders were seated in a dedication garden filled with thousands of roses bearing personal messages of love, hope and remembrance.

The Rose Parade is hosted annually by the Pasadena Tournament of Roses, a volunteer organization.

FLDRN’s Donor and Recipient Honorees Are Named for Rose Parade

“Light Up the World” Float Will Inspire 2014 Rose Parade Viewers