We begin our Photos of the Year slideshow for 2013 with the Rose Parade on January 1 in Pasadena, CA. From there, join us on this visual journey through the events and programs that promoted organ, eye and tissue donation, and transplantation throughout the year.

Travel through the months, until you reach the FLDRN holiday party at year’s end!

If you’d like to spend more time looking at each photo and reading the captions: Press the pause button and start the slide show with slide number 1 of 29. Slide 1 shows the image of the Donate Life float at the 2013 Rose Parade with the theme “Journeys of the Heart.” You can then click through each slide. 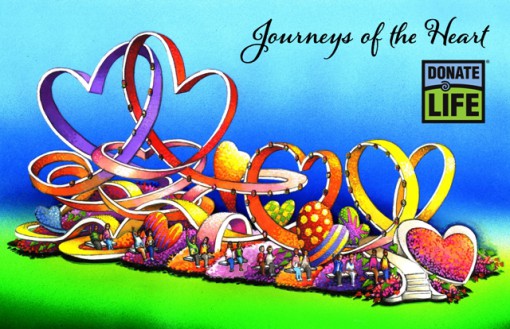 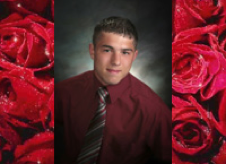 THE 2013 ROSE PARADE’S “JOURNEYS OF THE HEART” – January 1: The Rose Parade took place on January 1, 2013 in Pasadena, CA, and once again Finger Lakes Donor Recovery Network (FLDRN) participated as a sponsor of the Donate Life float. The float’s theme, “Journeys of the Heart,” was chosen to reflect the ups and downs of life’s many lessons. “Though our paths vary from the places we start, we are all connected on our Journeys of the Heart.” FLDRN was proud to honor a local organ donor, Ryan Converse, and an organ transplant recipient, Sue Sprague.

ROSE PARADE 2013 CELEBRATED THE LIFE OF RYAN CONVERSE – January 1: FLDRN honored Ryan Converse at the parade. Ryan was an organ donor at Samaritan Medical Center in Watertown, NY in July 2010. His picture – more specifically, a floragraph – was displayed on the float. Joe and Vicky Converse, Ryan’s parents, traveled to Pasadena to help decorate the float and participate in the events.

ROSE PARADE 2013 HONORED SUE SPRAGUE – January 1: FLDRN also honored Sue Sprague at the parade. Sue received a kidney and pancreas transplant in 1997 at Upstate University Hospital thanks to the Gift of Life from Terry Brown who was an organ donor at Rome Memorial Hospital. Sue, who traveled to California with Doug, her husband, rode on the float wearing Syracuse University colors.

ELMIRA JACKALS DONATE LIFE NIGHT – February 23: On the night the Jackals hosted the Kalamazoo Wings, organ donation was promoted in various ways. The highlight was the special Donate Life jerseys that the Jackals wore and then auctioned off live immediately following the game. A table was set up on the concourse where fans could get information about donation; enroll with the New York State Donate Life Registry and register to win prizes. A portion of the proceeds benefited the Arnot Ogden Medical Center. Standing beside the Elmira Jackals mascot were were Erma Corey, donor wife of Neil, and Greg Finch from Arnot-Ogden Medical Center.

ST. JOSEPH’S HOSPITAL FLAG-RAISING – April 1: St. Joseph’s Hospital in Syracuse held their flag-raising and Donate Life Month ceremony on the very first day of National Donate Life Month! The Donate Life flag was flown all through the month to honor the staff and donor families who have been affected by donation, and to help raise awareness about donation and transplantation.

CASINO NIGHT TO HELP FUND OUR TEAM AT THE 2014 TRANSPLANT GAMES– APRIL 6: FLDRN hosted Casino Night as a fundraiser for Team Finger Lakes who will participate in the 2014 Donate Life Transplant Games in Houston in July. The 1980s-themed Casino Night took place at Moose Lodge in Rochester. Shown here are Tim Parks, kidney recipient, and his sisters Becky Parks (left) and Megan Parks (middle). Becky was Tim's living kidney donor.

HEALTHCARE PROFESSIONAL—AND SISTER OF RECIPIENT—SPOKE OUT AT UPSTATE UNIVERSITY HOSPITAL – April 10: Upstate University Hospital’s Donate Life Month Celebration in Syracuse included an address by Kate Mitchell, a clinical educator the hospital. Kate recalled how her sister, Nonie Bergesen, had received a liver transplant just in time to save her life. She explained how, as a healthcare professional, her sister’s illness and transplant had touched her personally and made her realize even more than before how important organ donation is.

APPEARANCE BY LEGEND GATES ORLANDO AND FRIEND AT ROCHESTER AMERKS ORGAN DONOR AWARENESS NIGHT – April 12: A highlight of National Donate Life Month 2013 was the hosting of Donate Life Night by the Rochester Americans when they matched up against the Oklahoma City Barons at the Blue Cross Arena. On the left is Amerks Hall of Famer Gates Orlando who was the region’s first person to receive a total artificial heart. His heart transplant took place just a few weeks earlier on February 5 at the University of Rochester Medical Center. With Orlando is his friend, Geordie Robertson, a former Amerks player and a legend in his own right.

FOCUS ON LAUREN’S LAW AND STREAMLINING THE DONOR REGISTRY AT LEGISLATIVE EDUCATION DAY – April 16: Finger Lakes Donor Recovery Network staff and volunteers joined the New York Alliance for Donation and other donation and transplant organizations in Albany at the State Capitol for Legislative Education Day. The annual event’s efforts focused on two important agenda items: To thank legislators for their support for Lauren's Law, which makes the organ donation box a mandatory field on DMV transaction forms; and to urge legislators to support the development of a private-public partnership to manage the New York State Donate Life Registry.

“THE FULL CIRCLE OF CARING” AT UNIVERSITY OF ROCHESTER MEDICAL CENTER/STRONG MEMORIAL HOSPITAL - April 19: To celebrate National Donate Life Month, the hospital hosted “Giving and Receiving the Gift of Life: The Full Circle of Caring.” It featured a presentation and discussion that included staff members from the donation and transplant units, donor families, transplant recipients and Finger Lakes Donor Recovery Network representatives.

NATIONAL DONATE LIFE BLUE AND GREEN DAY – April 19: Donate Life America (DLA) designated this day as being the second annual “National Donate Life Blue and Green Day” in support of organ, eye and tissue donation and in celebration of National Donate Life Month. The Donate Life logo colors are blue and green. Americans were encouraged to wear blue and green (such as the bracelets shown here) and then post their pictures on the DLA photo contest app on its Facebook page for a chance to win $100 for the best blue and green “look.”

FLDRN CELEBRATED NATIONAL DONATE LIFE BLUE AND GREEN DAY – You can’t miss the blue and green fashion statement! The FLDRN team gathered to show their support for Donate Life America’s declaration that April 19 was Donate Life Blue and Green Day to endorse the importance of organ, eye and tissue donation.

DONNA AND MIKE AT THE 12TH ANNUAL FRIENDS OF STRONG ROCHESTER RIVER RUN/WALK – April 21: To raise awareness for organ transplant patients and families at Strong Memorial Hospital, the University of Rochester Medical Center invited individuals and teams to participate in this well-attended event during National Donate Life Month. The run and walk began at the Roundhouse Shelter at Genesee Valley Park. Shown here, from left: Donna Germano, a living kidney donor; Donna’s husband, Mike; Jim Hayton, who received one of Donna’s kidneys, and Jim’s dad. Donna, who was an anonymous donor, followed up to find out how her recipient was doing. Now, Donna and Jim remain in touch.

JEREMY SHAW AND FAMILY AT THE RIVER RUN/WALK – April 21: Transplant recipient Jeremy Shaw also participated in the River Run/Walk with his family.

ROCHESTER INSTITUTE OF TECHNOLOGY’S “IMAGINE” FESTIVAL PROMOTED ORGAN DONATION - May 4: A group of volunteers and transplant recipients raised awareness about donation and collected donor registry enrollments at the “Imagine RIT: Innovation and Creativity Festival.” The RIT event forms part of the “bLifeNY campaign,” a grassroots organ donation awareness group founded by Drs. Mark Orloff and Chris Barry at the University of Rochester Medical Center. Members include high school, college, and medical students, transplant professionals, and transplant advocates in the community.

DEDICATION OF MICHAEL’S PLACE TO HONOR DONORS AND THEIR FAMILIES – August 18: FLDRN’s special celebration during our Donor Family Picnic at Edridge Park in Elmira dedicated Michael’s Place in honor of all donors and their families. This area of the park was donated to Sharron O‘Buckley who created the memorial garden in honor of her son, Michael, who became a donor at the age of 17. Sharron has maintained this area of the park with the help of her family and friends for the last several years.

SEVEN STONES ADDED TO MICHAEL’S PLACE – August 18: On this special day, seven stones in honor of donors and their families were added to the garden for Michael’s Place. Each stone is engraved with special remembrances of the loved one. The dedication was celebrated by more than 60 people all of whom attended the picnic. In a poignant moment, family members spoke about their loved ones and released balloons containing personal messages.

PROMOTING LAUREN’S LAW – October 10: Preparing for a TV interview about the implementation of Lauren’s Law are (from left) Cheryl Dinolfo, Monroe County Clerk; Rob Kochik, Finger Lakes Donor Recovery Network Executive Director and Helene Ehmann who is a mother of a donor. Lauren’s Law was named for 13-year-old Lauren Shields, a New York State-resident, who received a heart transplant when she was 9. The law adds the following language to DMV applications for driver licenses and non-driver identification cards: “You must fill out the following section: Would you like to be added to the Donate Life Registry? Check box for ‘yes’ or ‘skip this question.”

LIVER RECIPIENT RICHARD PEREZ’S ROSE BOWL PARADE 2014 SEND-OFF CELEBRATION – December 16: University of Rochester Medical Center/Strong Memorial Hospital hosted a special send-off celebration for Richard Perez, a 10-year liver recipient, seen here speaking about his experience as a recipient. On January 1, 2014, Richard would go on to represent the hospital’s Solid Organ Tranplant Programs and FLDRN by riding on the Donate Life float at the Rose Parade in Pasadena. The pre-Rose Parade December event also recognized donors and their families who selflessly give the Gift of Life.

PRIOR TO ROSE PARADE 2014, ORGAN DONOR CHRISTINE SPRINGER’S LIFE WAS HONORED – December 20: Former Ulysses Town Justice Christine Springer, who died in 2007 and became an organ donor, was honored at a Ulysses Town Hall event prior to her being remembered during the 2014 Rose Parade in Pasadena on New Year’s Day. Speaking at the podium was one of Christine’s daughters, Molly deRoos. In the foreground is a floragraph depicting Christine. The image, made of flowers, was displayed on the Donate Life float during the parade. The glasses and paint brush on the table alongside the flowers contained sand and glue to make the floragraph. Molly and her daughter, Ali Brown (who happens to be a liver recipient), subsequently attended the parade.

FLDRN STAFF HOLIDAY LUNCHEON – December 18: The FLDRN team gathered to celebrate the festive season and to reflect on another significant year of saving lives through donation and transplantation. The luncheon was held at a restaurant in Geneva, NY.