The Amerks will host Donate Life Night on Wednesday, April 2 to encourage fans to be organ donors.

MORE DETAILS: For the second year in a row, the Amerks are partnering with Finger Lakes Donor Recovery Network (FLDRN) and the Amerks Alumni Association, including Hall of Famer Gates Orlando, the region’s first person to receive a total artificial heart and then a heart transplant, to raise awareness for organ donation.

April is National Donate Life Month, and the Amerks game will provide an opportunity for FLDRN staff and former Amerks players to encourage people to enroll in the New York State Donate Life Registry to become an organ donor and help save lives.

Any fan that signs up to be a donor at the game or presents their driver’s license to show they are already an organ donor will receive two complimentary tickets to an upcoming Amerks game as well as a special Donate Life foam hockey puck.

Orlando, who helped lead the Amerks to a Calder Cup in 1987, was the region’s first person to receive a total artificial heart, a high-tech pump, which kept him alive until he received a heart transplant on Feb. 5, 2013 at the University of Rochester Medical Center.

Registered organ donors can purchase tickets to that night’s game for just $10 when they “show their heart” on their driver’s license at the Box Office.

Several members of the Amerks Alumni Association, including Orlando, Jody Gage, Geordie Robertson and Steve Langdon will be on-hand throughout the evening to speak with fans about the importance of organ donation and encourage fans to become organ donors.

“Finger Lakes Donor Recovery Network is pleased to join the Rochester Americans to encourage their fans to give the Gift of Life through organ and tissue donation,” said Rob Kochik, executive director of the Finger Lakes Donor Recovery Network. “We hope the activities during the game prompt everyone to discuss their wishes with their family members and enroll in the Donate Life Registry. Locally, more than 700 residents are currently awaiting an organ transplant. Together we can help save lives.” 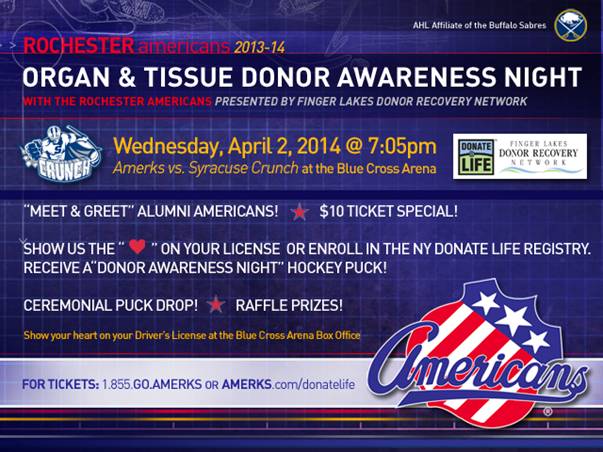