August 2014, the so-called “dog days of summer,” was certainly not a laid-back time for Finger Lakes Donor Recovery Network (FLDRN) when it came to promoting organ donation.

That’s because major sports events helped FLDRN’s life-saving mission by bringing attention to donation to communities in Rochester and Syracuse.

We have NASCAR’s Joey Gase, the Rochester Red Wings and Syracuse Chiefs to thank for the high-profile organ donation awareness and donor registration events! 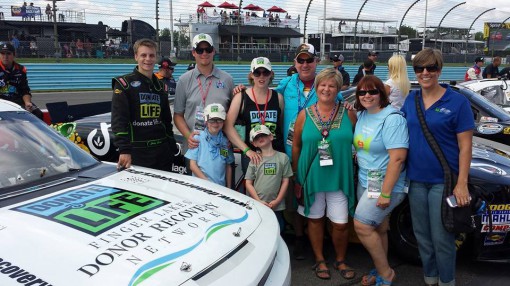 Sadly, in 2011, Joey’s mother, Mary Jo, passed away when he was 18 years old, and she saved numerous lives by becoming an organ donor. Since that time, Joey has been a passionate supporter of organ, eye, and tissue donation and uses his racing platform to help share his message.

At Watkins Glen, we were honored to invite local families directly impacted by donation and transplantation to spend the day at the race. Among them were Holly and Andy Campbell — Joey’s special guests — who, according to WETM18, lost their two month old son, Jake, in 2007 when he stopped breathing. Their decision to donate Jake’s eyes and organs led to restoring sight to two people and saving the life of a baby in need of a heart transplant.

In her remarks about this event, Amy James, FLDRN’s community education manager, said, “A great day was had by all, and Joey and his team could not have been more gracious.” 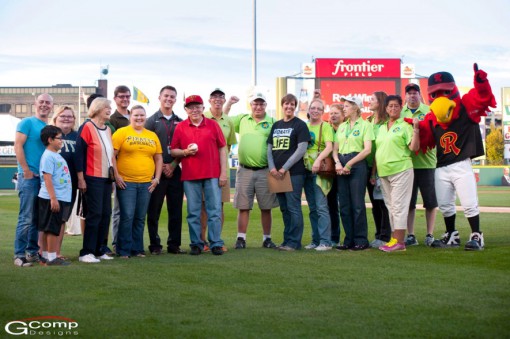 The Rochester Red Wings-Syracuse Chiefs game at Frontier Field in Rochester on August 17, 2014: Throwing out the ceremonial first pitch was David Swanson (red shirt and baseball cap), who received a single lung transplant in August 2013. To his right are his son and two daughters. His son, Derek, (wearing a lanyard) is Assistant Director of Group Sales at Rochester Red Wings. — Photo credit: Andy Gallo

Also in August in the summer of 2014, FLDRN was thrilled to participate in two baseball games between the Rochester Red Wings and the Syracuse Chiefs — one in Rochester (August 17) and the other in Syracuse (August 22). Both games created great awareness for organ, eye, and tissue donation.

Our evening in Rochester at Frontier Field helped us showcase an amazing transplant story with a direct connection to the Rochester Red Wings.  Derek Swanson, a member of the Red Wings’ marketing team, wanted to raise awareness for donation because his dad, David, received a single lung transplant in August 2013. And David was there to throw out the evening’s first pitch!

The evening at NBT Bank Stadium in Syracuse was the result of our ongoing collaborative relationships with SUNY Upstate Medical Center and MTF, and Central New York Eye and Tissue Bank.

Prior to the game, members of the organ, eye and tissue donation community were joined on the field by Kate Mitchell of SUNY Upstate Medical who spoke enthusiastically to the crowd about the importance of organ, eye and tissue donation. It was then time for the ceremonial first pitch, thrown by kidney recipient and Geneva resident Jason Swinehart. His living kidney donor, Jamie DiPronio, who had responded to a plea on Facebook from Swinehart’s relatives, was also on hand for the event, bringing awareness to living organ donation.

Throughout the night, more than 50 people signed up to be organ, eye and tissue donors. The evening concluded with spectators lighting glow sticks to represent those who were still awaiting life-saving transplants, followed by a beautiful fireworks display. 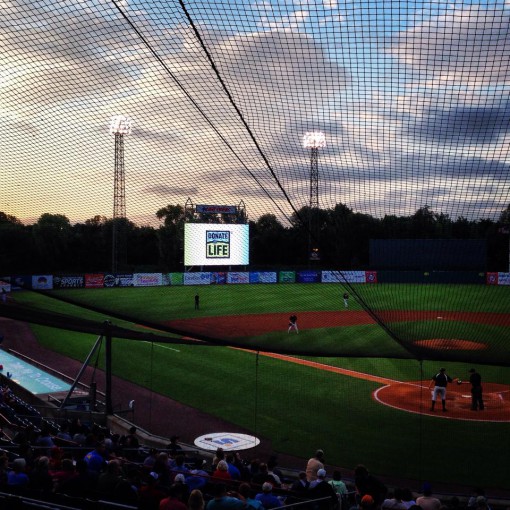 The Chiefs and Red Wings promote organ donation at NBT Bank Stadium in Syracuse on August 22, 2104. The “Donate Life” logo was prominently displayed on the giant screen.