America observes National Donate Life Month in April, a time to focus on the importance of organ, eye and tissue donation, and transplantation. The success of transplantation, and the dire shortage of donors, has caught the attention of media in the Finger Lakes Donor Recovery Network region. 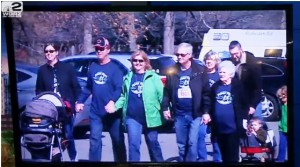 APRIL 12: The Brown and Wieland families walked together in the Rochester River Run/Walk 5K, sponsored by the Friends of Strong Memorial Hospital to benefit organ transplant patients. [Photo: wgrz.com]

Claude Brown, who lives in the Lockport-area, received a new heart in 2010 at UR Medicine’s Strong Memorial Hospital. Brown’s donor was 22-year-old Ricky Wieland, an Ohio National Guardsman studying to be a mechanic.

On April 11, during a National Donate Life Month event filled with emotion, Brown and his wife Molly met Ricky’s parents, Richard and Debbie Wieland. The families revealed their identities last November, which led to the meeting.

April 15, 2015: Samaritan Medical Center in Watertown, NY, is working with health partner Finger Lakes Donor Recovery Network during National Donate Life Month to decrease the number of people who die or whose health deteriorates because they are waiting for an organ transplant. Family members of loved ones who donated their organs shared their stories Wednesday.

VIDEO – WNYF-TV: Jamie Lawrence, Daughter of a Tissue and Eye Donor, Explains the Importance of Family Discussions About Donation

April 15, 2015: Rob Kochik, executive director of the Finger Lakes Donor Recovery Network, and Jamie Lawrence, whose father was an eye and tissue donor, are interviewed during National Donate Life Month on 7 News This Morning. The key message: It’s important to discuss your wishes to be a donor with loved ones ahead of time.

April 15, 2015: As part of Donate Life Month, Upstate Medical University is encouraging everyone to sign up for the donor registry. They say New York is home to ten percent of Americans waiting for a transplant, but only three percent of all registered donors.
READ MORE AND SEE THE VIDEO