National Minority Donor Awareness Week is a special observance that honors minorities who have been organ, eye and tissue donors, and it encourages others to register as donors and take better care of their health in order to reduce the number needing a transplant. 2016 marks the 20th year of the national observance.

The Need for Minority Donors in  the United States: Minorities make up 58 percent of those currently on an organ transplant waiting list.

Almost 35 percent of the more than 100,000 people on the national waiting list for a kidney transplant are African-American.

According to the United States Department of Health and Human Services (HHS), “African-Americans, Asians and Pacific Islanders, and Hispanics/Latinos are three times more likely than Caucasians to suffer from end-stage renal (kidney) disease, often as the result of high blood pressure and other conditions that can damage the kidneys. Almost 35 percent of the more than 100,000 people on the national waiting list for a kidney transplant are African-American.”

Advantages of Receiving Organs from Minorities: HHS also states: “Although organs are not matched according to race/ethnicity, and people of different races frequently match one another, all individuals waiting for an organ transplant will have a better chance of receiving one if there are large numbers of donors from their racial/ethnic background. This is because compatible blood types and tissue markers—critical qualities for donor/recipient matching—are more likely to be found among members of the same ethnicity. A greater diversity of donors may potentially increase access to transplantation for everyone.” 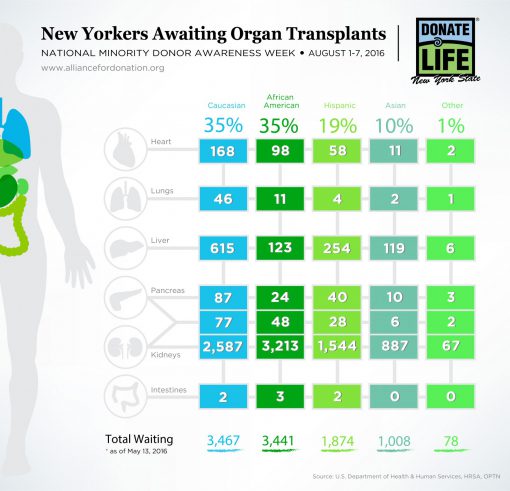