Finger Lakes Donor Recovery Network (FLDRN) was privileged to honor a local organ donor by placing his picture – actually a florograph – on the Donate Life Float in the 2012 Rose Parade which was held on Monday, January 2 in Pasedena, CA.  Scott Patrick Conrad, who gave the gift of life on March 17, 2010 was honored by having his florograph on the float.

The families of organ and tissue donors, living donors, and transplant recipients  joined together to honor the preciousness of …One More Day on the ninth Donate Life Rose Parade float entry. 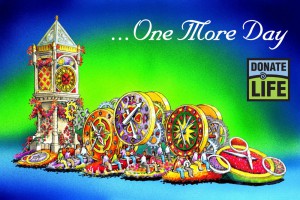 Rob Kochik, FLDRN Executive Director, said, “The opportunity to live, or relive, a precious moment in time inspires us to Just Imagine…One More Day when donor families are reunited with loved ones, transplant recipients thrive, and living and registered donors step forward so that a life-saving transplant is available to everyone in need.”

Scott’s Greatest Joy: Being a Dad

Born October 13, 1980, Scott  was the youngest child in his family. He was a wonderful person and always willing to help anyone at any time. Scott graduated from West Irondequoit High School in 1999. After a five year apprentice program, he became a journeyman and a proud member of Local 86 Electrical Union. His greatest joy was being a father to his son Aiden, who was born in 2006.

On March 13, 2010, Scott was taken to Rochester General Hospital after being found unresponsive and not breathing. The neurologist met with the family and explained Scott had no brain function and was not going to survive. Unfortunately, Scott’s death was due to a drug overdose.

“We knew immediately what Scott’s wishes were.”

Scott Patrick Conrad gave the Gift of Life in 2010, and was honored during the 2012 Rose Bowl Parade.

“When the doctor approached us about organ donation, we knew immediately what Scott’s wishes were. Scott had talked about this with his brother and sister,” said Scott’s mother, Helene. Four days after arriving at the hospital, Scott was taken to the operating room so that his organs could be recovered. “I remember kissing him for the last time,” said Helene. “A face I had kissed thousands of times was being taken away from us forever.

“Our journey has not been an easy one, but we thank God for the opportunity to make a difference in other people’s lives. We believe Scott is still with us. Because of his gift of life, two people are no longer dependent on dialysis, his heart beats for another and his liver has restored someone’s health. People may not remember when or how he died, but they will never forget what he did for others by donating his organs.”

How to Register to Be an Organ, Eye and Tissue Donor

Just as every day counts, so does every donation opportunity. “We hope that anyone who has not yet registered will be inspired by the Donate Life float to join the more than 100 million Americans who have checked ‘Yes’ for donation when applying for or renewing their driver’s license or identification card,” said Kochik.  Enroll in the New York State Donate Life Registry today.

The Donate Life Rose Parade float has become the nation’s most visible campaign to inspire people to become organ, eye, and tissue donors. The concept originated with lung recipient Gary Foxen of Orange, Calif., who wanted to express gratitude to donors who make transplantation possible.