FLDRN’s Donor and Recipient Honorees at the 2014 Rose Parade

As we have done for the past six years, the Finger Lakes Donor Recovery Network had the pleasure of participating as a sponsor of the 2014 Donate Life Float. And the float was recognized as the winner of the Theme Award.

We honored a deceased liver donor and a liver transplant recipient from our area at the 125th Rose Parade on January 1, 2014. The Rose Parade is hosted annually by the Pasadena Tournament of Roses, a volunteer organization.

The Donate Life Float won the Theme Award at the 2014 Parade. Read about it in our news section.

A memorial floragraph to honor liver donor Christine Springer will be displayed on the Donate Life Float.

The deceased organ donor whose life was celebrated at the 2014 Rose Parade is Christine Springer. At the age of 71, Christine became a liver donor and saved the life of a 61-year-old man.

By a strange coincidence, Christine’s granddaughter, Ali Brown, received a life-saving liver at age 11 from an anonymous 13-year-old.

The theme for the 2014 Donate Life Float was “Light Up the World.”

In the official news release about the float, the organizers said, “Five enormous lamps [representing the lighting up of the world] will be adorned with 72 memorial floragraph portraits of deceased donors whose legacies of life shine brightly.”

Christine’s daughters — Molly deRoos (Ali’s mother), Robin Springer and Kate Springer — who made the decision to donate their mother’s organs, remembered and honor her with one of the memorial floragraphs at the parade.

Recalling how she felt when Rob Kochik, FLDRN’s executive director, told her that Christine would be honored on the Donate Life Float at the Rose Parade, Molly said: “I was overcome with emotion. It’s not often that I’m speechless, but I never expected something like this. My mother would be humbled to be honored in this way.” 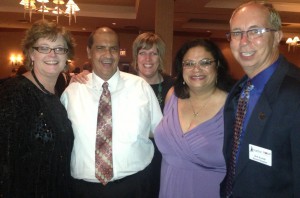 Liver transplant recipient Richard Perez was one of the 30 people riding on the Donate Life Float in the 2014 Rose Parade in Pasadena. On July 21, 2013, Richard celebrated the 10th anniversary of his transplant.

In 2002, Richard discovered that his liver was failing. It turned out to be cirrhosis of the liver due to hepatitis C.

His only hope was a transplant.

After spending ten months on the waiting list, Richard received a new liver from a deceased donor at Strong Memorial Hospital/University of Rochester Medical Center.

Richard says, “I feel wonderful! My life has changed in ways I cannot explain and every day I’m so thankful to my donor and their family. Even though I have to take anti-rejection medication twice a day and need to be careful and prevent getting sick, I live a relatively normal life.”

He adds: “Because someone made that decision ten years ago, I was able to see my son graduate from college and help plan his upcoming wedding. I’m looking forward to grand kids!”

Rob Kochik, executive director of FLDRN, said: “We were delighted to honor Christine and Richard. Christine’s generous gift at age 71 reinforces the fact that individuals are never too old to be organ donors. Without his transplant Richard wouldn’t be alive, let alone taking part in the Rose Parade, which was viewed worldwide.” 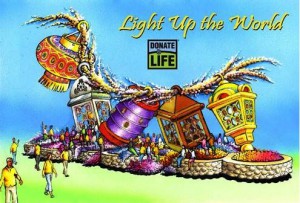 On June 17, 2013, more than 70 organizations supporting Donate Life America’s life-saving mission unveiled their 11th Donate Life Rose Parade float: “Light Up the World,” a festival of beautiful lanterns that will inspire viewers worldwide to save and heal lives through organ, eye and tissue donation.