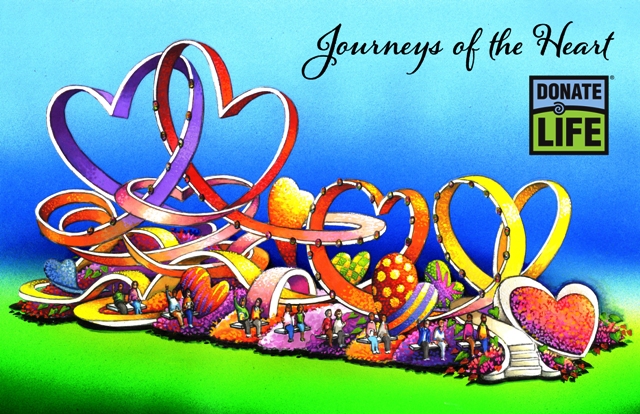 The Donate Life float theme was “Journeys of the Heart.”

The Rose Parade took place on January 1, 2013 in Pasadena, CA, and Finger Lakes Donor Recovery Network (FLDRN) – as it has done for the past five years – participated as a sponsor of the Donate Life Rose Parade float.

The annual parade received widespread coverage on national TV stations, and the Donate Life float’s presence, designed to promote organ donation and transplantation, was seen by an audience of millions.

The Donate Life theme was inspired by the 2013 Rose Parade theme “Oh, the Places You’ll Go!”

This year, FLDRN was proud to honor a local organ donor and an organ transplant recipient.

Ryan Converse, from Watertown, NY, was an organ donor in 2010.

Ryan Converse was an organ donor at Samaritan Medical Center in Watertown, NY in July 2010. His picture – more specifically, a floragraph – was displayed on the float. Joe and Vicky Converse, Ryan’s parents,  traveled to Pasadena to help decorate the float and participate in the events.

Sue Sprague, a pre-school teacher from Syracuse, received a kidney and pancreas transplant in 1997.

Sue Sprague received a kidney and pancreas transplant in 1997 at Upstate University Hospital, thanks to the Gift of Life from Terry Brown who was an organ donor at Rome Memorial Hospital. Sue, who is a pre-school teacher in Syracuse, has done amazingly well post-transplant. She rode on the float wearing Syracuse University colors! Sue traveled to California with her husband, Doug.