The 2015 Rose Parade took place in Pasadena on a surprisingly cold New Year’s Day. Time Warner Cable News focused on the Donate Life Float, and highlighted the incredible story that brought three individuals and their families together through organ donation. 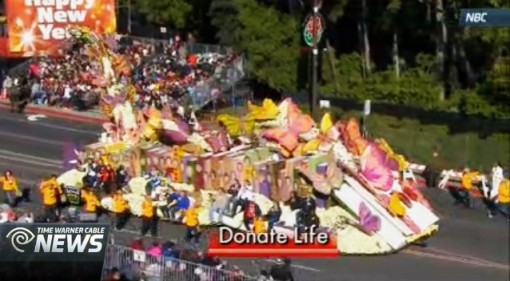 The Donate Life Float made its appearance during the 2015 Rose Parade in Pasadena on January 1. The float’s theme was “The Never-Ending Story.”

“I had no idea any of this would happen. I had no idea of the impact and the number of lives touched,” said Laurie LoMonaco.

She donated her kidney to a stranger. Ten days later, Laurie’s friend Paul Guyette suffered a fatal brain hemorrhage. Guyette’s family says it was LoMonaco’s selfless act that helped them make the decision to donate his organs.

Orlando, former Buffalo Sables player, rode on the Donate Life Float whose theme was “The Never-Ending Story,” tying in with the Rose Parade theme, “Inspiring Stories.”

“We saw a lot of emotions, a lot of cheering, a lot of clapping and tears. It was a float I think a lot of people were waiting to see,” said Orlando.

The parade was televised on multiple channels in the United States and worldwide. This TWC report includes video footage from NBC.