GIFT OF LIFE STORY: Four-Year-Old Drake Became a Miracle for Others

Jaime Erskine-Pettit is a physician assistant and has worked at the emergency department of Strong Memorial Hospital for about 10 years. Here, Jaime recalls how her young son Drake became an kidney donor. As Jaime says, Drake saved two lives, proving the lesson he was being taught that “Sharing is Caring.” 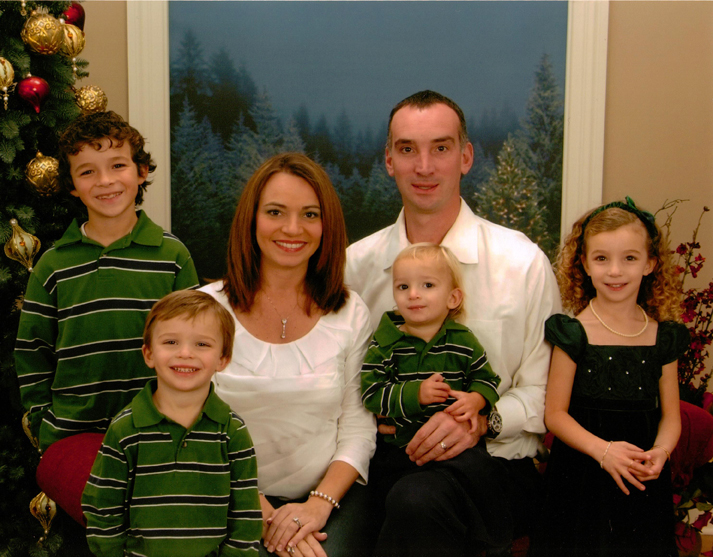 The Pettit family, during the 2011 Christmas holiday season. (L. to r.) Trevor, Drake, Jaime Erskine-Pettit, Brian, Tiernan (being held by Brian), and Delaney.

I am married to a wonderful husband, Brian, and have been blessed with four beautiful children. At the time of the accident Trevor was seven, Delaney was five, Drake was four, and Tiernan was two.

On Saturday, June 23, 2012 our whole life changed. In the afternoon, my four children were swimming with two adults in the pool. I was home recovering from surgery. I had been sitting out on the deck watching them. My children had taken swim lessons and were aware of pool rules.

I had just walked into the house as everyone was getting out of the pool, when my daughter Delaney started to yell that Drake was going to the bottom of the pool.

My son Trevor dove in and got him out immediately. I started CPR and 911 were called. En route to Strong Memorial’s emergency department, Drake reestablished a pulse and blood pressure. It was at that time, that we noticed a large bump developing on his head.

Upon arriving at Strong, Drake was transferred to the PICU and put in the hypothermic protocol.

The Full Effects of the Accident

Five days later, on the Wednesday, we were aware of the full effects of the accident and had a prognosis around 10 pm. Both my husband and I are in healthcare and asked the PICU doctor if Drake would be eligible to donate organs.  He said yes, and would arrange a representative from Finger Lakes Donor Recovery Network (FLDRN) to meet with us the next morning.

On Thursday morning, a member of FLDRN came in to speak with my family. We were informed about the donation process.

We scheduled a meeting for Thursday during the lunch hour when we could all be present, including Drake’s doctors, nurses, social workers and his pediatrician. I could see the empathy and compassion in the faces of the staff. All of our questions were answered. We were given time to discuss privately. At no point did my husband and I ever feel pressured.

Sometimes it just does not work.  Drake’s fate had been determined.  So we worked to help someone else’s fate.

We had the best medical care possible and every life-saving measure available.  Sometimes it just does not work.  Drake’s fate had been determined.  So we worked to help someone else’s fate.

On Thursday at 6 pm, my husband and I decided to withdraw care and I signed consent for full donation.  We were told that they had a patient to receive the kidneys.

A Piano Recital, and Our Last Very Special Night with Drake

The next day, Friday, June 29, my oldest son, Trevor, had his piano recital. During this time, he thought that family and friends were coming into town for his recital.

We asked if they could do the surgery on Friday night, after Trevor’s piano recital and also after we had tucked our other three children into bed. Everybody at Strong was very accommodating, even though that would not be until around 10 pm.

We knew Thursday night would be our last night with Drake. Our nurse and I removed all the medical devices that were not necessary and gave him a bath. We put him in his favorite pirate shirt and shorts.

Prior to the accident, we had seen the movie Tangled, and he loved it. They made room in his bed for my husband and me to sleep with him and watch the movie about Rapunzel. We even had popcorn in the room.

On Friday, they told us that the recipient was too sick to receive Drake’s kidney and they were expanding the search area. Shortly afterwards they told us they had a recipient, a father of four. They wanted to keep the plan for that night. We were given all details about the process. That night, we went to Trevor’s piano recital.

At home, we have a nighttime routine. It involves doing a reward magnet board, followed by reading stories in the cozy corner. Then we go around back to bed and snuggle with each of our kids.

Drake loved to see his older brother and sister dance or perform a piano recital. We wanted to incorporate this into his last bedtime.

After the piano recital, we went home and tucked our other three kids into bed. Then my husband and I went back up to the hospital.

In Drake’s hospital room we were met by the PICU staff and transplant team. We all went down to the operating room together.

When we arrived in the operating room, there was a nice recliner for us to sit in. They had three gift bags prepared for our other children that included a stuffed animal dog.

I sat in the recliner and Drake was put in my lap. My husband and I read him his favorite book, Pete the Cat.

We were given some time to spend alone with Drake. At no time did we ever feel rushed. I sat in the recliner and Drake was put in my lap. My husband and I read him his favorite book, Pete the Cat. Then we played the recording of Trevor’s piano recital for him.

When we were ready, everyone returned to the room and Drake was able to pass peacefully in my and my husband’s arms.

Drake Gave the Gift of Life

It was then that. Drake gave the gift of life.

We were escorted to a waiting room where cookies and juice were available. They also had packed up Drake’s hospital room while we were in the operating room. Everything was nicely packed in a wagon.

Sue Miller, from FLDRN, kindly walked us out to our car and helped to pack everything in. She asked if we would like to be notified after the recipient had received the kidneys. We said yes.

The next morning, Sue called to let us know that there were actually two recipients who were able to utilize Drake’s kidneys. The surgeries went well.

The contact did not end there. Sue has followed up with us multiple times. We have received brochures and words of encouragement in the mail during the holidays and at other difficult times. They also mailed books to my children. We have attended a holiday function for families of donors.

During this time, our emotions were all on a roller coaster. You are in shock because you realize this tragedy will forever change your life. It will rock your foundation and being. Things as you know them are over. You have to decide what you will make of the situation.

We decided to allow our tragedy to be someone else’s miracle. Drake, at four, was learning, “sharing is caring,” and what better way is there to demonstrate that than the donation of his kidneys? I find some peace in knowing that out of this horrible situation, we were able to create something positive.

The Pettit family has been kind enough to share a selection of family photos with us.

Dreams from Drake: A Foundation with a Mission to Help Local Children and Teens

A photo on the Dreams from Drake website: Drake, at his 4th birthday party.

In an effort to bring something positive out of this tragedy, Jaime and her sister founded “Dreams from Drake.”

A 501(c)(3) not-for-profit volunteer charitable organization, the mission of Dreams from Drake is to provide local children and teens with various forms of support needed to move forward while experiencing the confusion and grief associated with the loss of a sibling or parent.

The foundation’s hope is to make an incredibly difficult and painful time somewhat more bearable by providing these children and their families with resources needed to ensure that they go on to live healthy, happy and productive lives.

Please visit the Dreams from Drake website at www.DreamsfromDrake.org.