After WAITING FOR 10 MONTHS, Fred Gets a New Heart

Fred Knewstub once ran five marathons, several half-marathons and in other endurance runs. Then, when he felt “something like a butterfly” and light headed, he heard the alarming news: He had serious cardiomyopathy causing congestive heart failure.

Finally, when I had just about given up hope after waiting more than 10 months at Strong Memorial Hospital in Rochester to get a heart transplant, I received the gift of life. On April 16, 2014 I had my dying heart removed and a donor’s heart transplanted.

When I found out there might be a heart available that special day, I tried hard not to get my hopes up. I had seen a number of patients getting prepared for a transplant only to find out at the last minute it was not going to work out. Nevertheless, as my daughter, Joby, with her three children walked down the hall towards me just two minutes after I had heard about the potential heart, I cried as I told her about the real possibility of getting a heart within hours.

When I called my wife, Linda, she jokingly asked, “Did you get your heart yet?” I said, “Well, actually…” She dropped everything and was soon on her way from Trumansburg. Luckily, the transplant was a go and my family was able to get there in time to wish me well before I went down to surgery.

It felt like a miracle, like I was in a dream. The surgery was successful, and it’s been over five months since the surgery.

It felt like a miracle, like I was in a dream. The surgery was successful, and it’s been over five months since the surgery. I feel so very lucky and blessed to be home with my wife and looking out at my backyard. A miracle had happened. I had received the greatest gift I could ever have.

Super-Active and Then a Patient With a Serious Heart Ailment

During the 1990’s I ran five marathons, several half-marathons, extensive runs along the Finger Lakes Trail, 10K’s, and 5K’s. I completely enjoyed running. It made me feel free and healthy. One day I told my doctor that I had felt something like a butterfly and then felt very light headed and that this had happened several times. He referred me to a cardiologist to have it checked out.

During my first visit with the cardiologist, he informed me that I had serious cardiomyopathy causing congestive heart failure, and that we would be seeing a lot of each other. He was shocked to hear about my running, and said it was quite unusual for a person with a heart condition to be able to run that much.

The cardiologist said no more marathons, but if I felt good enough, a half-marathon was the limit. That was in 2001. He had me wear a halter monitor to monitor my heart rhythm. He saw that I had ventricular tachycardia, a potentially fatal rhythm. So I received an ICD, an implanted cardio defibrillator, that could monitor my heart’s rhythm and deliver a powerful shock if it detected the fatal rhythm. The ICD saved my life several times.

I did keep running with my buddies. We would run four to 10 miles regularly, and it always made me feel good.

Congestive Heart Failure Worsened and the Need for a Transplant 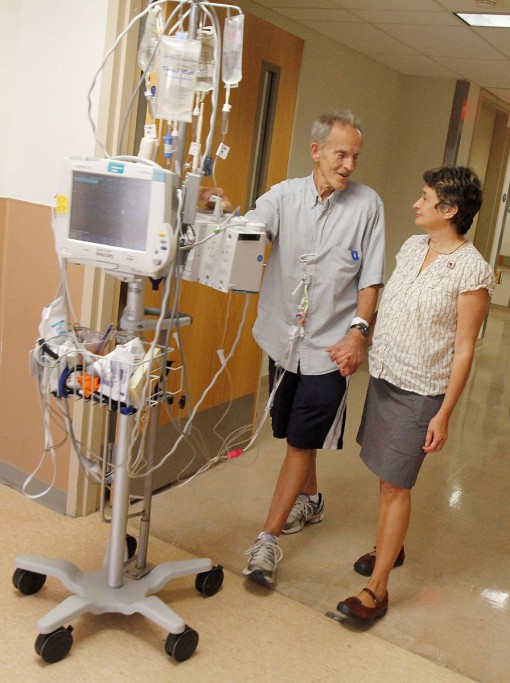 Fred Knewstub walks with wife Linda as they exercised in the hallways at the University of Rochester Medical Center. (Photo courtesy of the Democrat & Chronicle.)

In 2012, my congestive heart failure got steadily worse and my symptoms became increasingly noticeable. My cardiologist referred me to Dr. Eugene Storozynski in Rochester. Dr. Storozynski, an Associate Professor in the Department of Medicine, Cardiology, concluded that I needed a heart transplant and referred me to Strong Memorial Hospital for a right heart catheterization.

This indicated I was indeed a candidate for either a left ventricular assist device ( LVAD) or a transplant and was admitted to the 7th floor cardiac unit on June 14, 2013. I did not leave until May 5, 2014.

After the shock of becoming an institutional resident, I started to get to know the other members of the community I was now living in. I was bored and so were many of the other long-term patients. I got the idea that we could have “Movie Night” and “Game Night.”

At Strong, 7-34 (as it is fondly referred to) is where the patients in need of a transplant wait until a heart becomes available. After the shock of becoming an institutional resident, not able to be home with my wife, or playing with my grandchildren, I started to get to know the other members of the community I was now living in. The nurses were excellent and the doctors were highly skilled. But, I was bored and so were many of the other long-term patients.

I got the idea that we could have “Movie Night” with heart healthy snacks and gained permission to access a conference room with a computer, projector, and an outstanding sound system. Soon, “Game Night” was added to the weekly social calendar as well as puzzle challenges and trivia questions. We enjoyed the break from the monotony of waiting for a heart and praying that one would become available before it was too late.

In addition to breaking up the boredom and having something to look forward to each week, we all enjoyed the interaction with one another. As patients in different stages of a progressive disease, we had a chance to vent, share histories, and make important human connections.

By the fall of 2013, I began reaching out to the Rochester Public Library to investigate the possibility of borrowing a small rotating collection of books, videos, CD’s and audio books. The public library was very supportive. They sent a great selection of materials each six weeks in addition to any specific requests the patients might make.

When word got out that we were starting a small patient library, book donations starting pouring in. At one point I kind of got in trouble because there were more books than the small space we were allotted.

In many ways these projects were actually selfish. They gave me a sense of purpose, a semblance of control, and connection with the outside world. I’m grateful to the staff of 7-34 for giving me so much support in these endeavors. They seemed to realize that these “projects” of mine were critical to my sense of well-being.

Support From Heart Recipients, Family and the Community

Another great support were Bob and Gates, former heart recipients, who visited the unit often. They came in regularly to check on each of us and spent valuable time talking and encouraging all of us to hang in there and stay strong. These people were a tremendous help to me and my fellow patients. 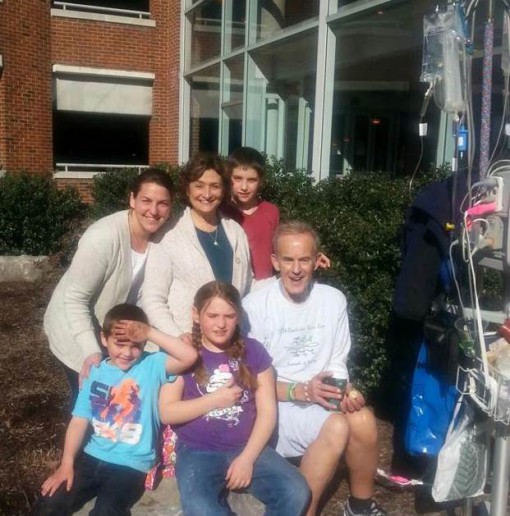 Outside the hospital, front row, from left to right: Two of Fred’s grandchildren, Boden and Hatteras, who are sitting alongside Fred. Back row, from left, Joby, Fred’s daughter; Linda, his wife, and grandson Reuben. The picture was taken in the spring of 2014, a couple of weeks before Fred’s transplant on April 16, 2014.

The greatest support of all was my family. They visited regularly, sent cards, pictures, notes and gifts. My wife Linda brought me nourishing soups and food from home to break the monotony of the hospital diet. I would not have survived without her conscientious and continuous support.

My children, grandchildren, and extended family from Philadelphia and Syracuse all visited and sent care packages. As lonely as it sometimes got, I always knew that they hadn’t forgotten me.

I also felt a great deal of support from my community. This support came in the form of visits and calls but also from hundreds of colorful origami cranes that were folded by my grandchildren and their schoolmates. I even received a box of cranes from as far away as New Zealand. I felt like Sadako in the Japanese tale and was overwhelmed by the generosity and care that came from my community.

In addition, our family planned a special fundraiser. We will never be able to thank the many individuals businesses in Ithaca and Trumansburg that contributed to making the event a success.

The Months Dragged On. Then, Finally, a Possibility of a New Heart

In spite of all the support and positive energy, the waiting continued and the months dragged on.

I was getting sicker and sicker with each week and gradually getting more discouraged. I began to fear that I would never go home again to be with my wife and family; never walking free without tubes and an IV pole as my third leg.

I couldn’t believe it. A miracle was taking place. I was about to receive, from a total stranger, the most important gift of all, the gift of life.

I had almost given up completely until that day when the nurse practitioner poked her head into my room and said, “Could I speak with you? There’s a possibility that there may be a heart for you today.” I couldn’t believe it. A miracle was taking place. I was about to receive, from a total stranger, the most important gift of all, the gift of life.

I hope to have the chance someday to thank the donor’s family and express what that gift has meant to my loved ones and me. It is hard for me to express in words just how grateful I am to the nurses, doctors, donors, family, friends, community, fellow patients and heart recipients. Everyone, thank you. Thank you. Thank you!