Sometimes, an act of generosity can have far-reaching consequences. That’s certainly the case when a young man, who lives in the Syracuse area and who prefers to remain anonymous, donated a kidney to a stranger. It led to a Paired Kidney Exchange.

Introduction: How Does a Paired Kidney Exchange Work?

FOR EXPLANATION PURPOSES ONLY: THE NAMES USED HERE (MARY, AMIR, CARLOS AND SHAUNA) ARE ALIASES . THEY ARE NOT THE ACTUAL NAMES OF THOSE INVOLVED IN THE UPSTATE KIDNEY EXCHANGE. The United Network for Organ Sharing (UNOS), utilizing material from the New England Kidney Exchange, illustrates how a paired kidney exchange works. Mary and Carlos are incompatible, as are Amir and Shauna. But Mary can donate to Shauna; likewise, Amir can donate to Carlos.

Overview of What Happened

Coming Together of Living Donor and Transplant Recipient: When Larry Met Deanna

When he chose to give away a kidney and remain anonymous, a young man — a so-called “altruistic donor” — triggered a series of events that led to the first-ever four-person kidney donor chain, known as a paired kidney exchange, for Upstate University Hospital in Syracuse, NY on May 27, 2014.

As a result, two people who desperately were in search of donors were able to receive kidney transplants. And five and a half months later, on November 14, two strangers — a kidney donor and recipient — would get to meet each other for the first time.

Step #1: You could say this story about four people begins when Larry Secor, who lives in Montezuma, NY, offers to donate a kidney to his wife, Marilyn. She has been on the kidney transplant list for two years and dialysis for nine months. Unfortunately, Larry finds out that he isn’t a match. Among the tests for matching, the blood type of the donor must be compatible with the recipient.

Step #2: But, as chance and timing would have it, Upstate University Hospital notifies Marilyn they have another person willing to donate a kidney — a young man who doesn’t even wish to disclose his identity. 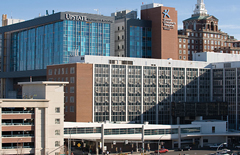 University Hospital in Syracuse is part of SUNY Upstate Medical University and is the only academic medical center in Central New York.

Step #3: When Marilyn and Larry receive the good news, Larry could choose to allow her transplant to take place and then go on with his life. But he feels very differently. If Larry can’t give the gift of life to his wife, he figures, he will follow in the footsteps of the unknown donor, and donate a kidney to someone else — also a stranger.

Step #4: Completing the four-person kidney donor chain is Deanna Freeman, a Watertown resident who has been on kidney dialysis for EIGHT years. She is the fortunate stranger who receives Larry’s kidney.

Step #5: The donations and transplants take place simultaneously on May 27 at Upstate University Hospital — the doctors remove kidneys from the two living donors in one operating room and transplant them into the two recipients in an adjacent operating room.

And that’s how the anonymous person’s donation has a domino effect that touches four lives.

“This [a paired kidney exchange] can only work thanks to the heroes that step forward and offer a gift of life.”

William Pelley, the transplant administrator at Upstate Medical University, said the use of a paired kidney exchange is another tool as transplant teams work to provide needed kidneys to their patients.

“The coming forward of an altruistic donor allowed us to transplant two patients instead of one,” Mr. Pelley said. “And both patients received a living donor kidney, which has the best patient outcomes. But this can only work thanks to the heroes that step forward and offer a gift of life.”

Ellen Havens, R.N., the transplant program’s living donor coordinator, said, “Our team feels thankful every day to be part of such a life affirming specialty program.”

Coming Together: When Larry Met Deanna 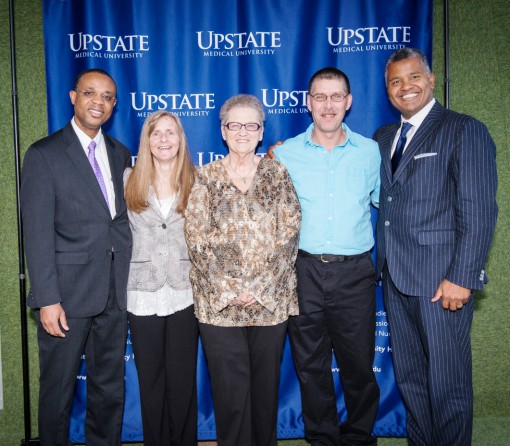 NOVEMBER 14, 2014: Transplant patients, one of the donors and the surgeons who participated in Upstate University Hospital’s first donor kidney chain. From left, Dr. Vaughn Whittaker (interim transplant director), Marilyn Secor, Deanna Freeman, Larry Secor and Dr. Keith Melancon. Larry Secor donated his kidney to Deanna Freeman. They did not know each other until they met for the first time in celebration of Donor Sabbath during this mid-November gathering and news conference. Marilyn Secor received a new kidney from another altruistic donor, who wishes to remain anonymous.

Upstate University Hospital hosted a donor-recipient meeting and news conference on November 14, 2014, during which time Larry Secor and Deanna Freeman would come face-to-face for the first time. For her part, Marilyn could only offer a silent prayer of thanks for her absentee, anonymous donor.

The get-together coincided with National Donor Sabbath, an annual program that highlights the need for organ donors across the United States.

The night before the meeting, Deanna admits she felt anxious, concerned that she wouldn’t adequately be able to describe how grateful she was. So, she wrote a letter to Larry, which she handed to him the next day.

“In the letter,” Deanna said, “I felt more comfortable being able to thank him, considering that he doesn’t even know me.” Afterwards, she said, “It was wonderful to meet my donor. His family was very nice.”

After her transplant, Deanna was able to return to work at a school cafeteria where, she proudly points out, she has been employed for 40 years. Married for 42 years, Deanna has a daughter and five grandchildren. Their ages range from 13 years to two months—the last of whom, a granddaughter, was born after Deanna received her new kidney.

Marilyn and Larry have been married for 27 years. They have three daughters and two granddaughters. Following her transplant, Marilyn could resume her role as a homemaker. For most of her adult life, Crohn’s disease had prevented her from working outside the home. Larry is a facilities technician at a Finger Lakes winery, and he went back to work eight weeks after donating his kidney.

When asked why he decided to give a kidney to a stranger, Larry responded by saying, “It was to pay it forward. I was asked by the hospital if I wanted to enter a chain or swop and I told them ‘of course.’ If there is someone out there willing to donate to my wife, to improve her quality of life, then why not pay it forward? I had seen how sick Marilyn was, how it affected her and all those months on dialysis.”

Marilyn told WSYR-TV, ABC’s local Syracuse affiliate, the donation and transplant meant she could do things not possible before and “feel a lot better.” She summed up her thoughts by saying: “It’s just an amazing thing for someone to come forward and do that.”

Free from dialysis, Deanna, said: “It was wonderful, to have someone that selfless to give a kidney. I’d like to thank him from the bottom of my heart.”

“Now I can watch Marilyn playing with our grandkids instead of sitting on the couch or lying on the bed. It’s just been a miracle.”

Larry hopes that one day the altruistic donor will step forward so that he and Marilyn can thank him.

“I just want to shake his hand,” Larry said. Tearing up, he went on to say,” What he did for my family is amazing. He has his reasons to remain anonymous but we can’t say enough to thank him for what he did for my wife, kids and grandkids. Now I can watch Marilyn playing with our grandkids instead of sitting on the couch or lying on the bed. It’s just been a miracle.”

“They’re the most wonderful doctors I’ve met,” Deanna said, following the emotional meeting. “They are very compassionate and caring.”

Dr. Melancon described altruistic donors, like the person who donated to Marilyn, as being “angels that are willing to come forward.”

Dr. Whittaker, who is Upstate’s interim transplant director, said the kidney exchange allowed him to meet “fantastic human beings that are the center of the exchange was truly a life changing event for me.” He added: “I will forever be grateful for the opportunity to take care of such a fine and selfless set of individuals.” 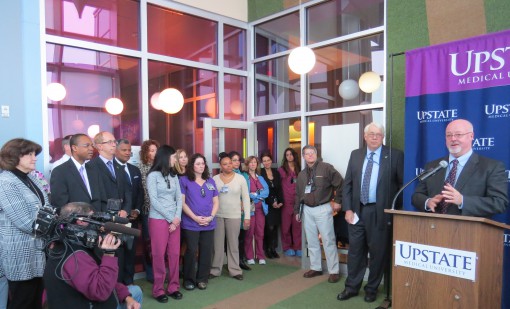 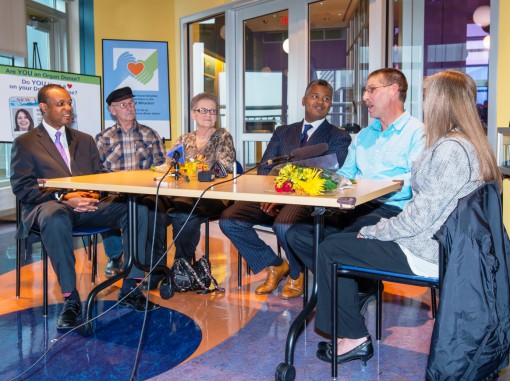 Kidney recipient Deanna Freeman (third from left) is surrounded by her family members. 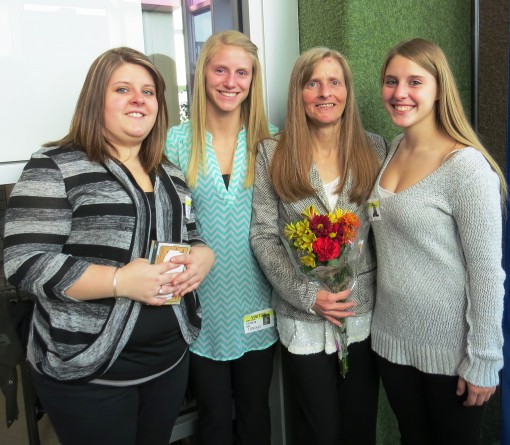